Thousands of people were in attendance at the conference, when the invitation was given hundreds came forward. There was concern about what would happen to these new believers as they returned to their villages, many of which had no pastor. Many of the pastors had no Bible training. Who would disciple them?

A challenge was given to pray for 3,000 national pastors so that they could reach the 35,000 unreached villages in one South Asian country alone.

Later at the event about twenty pastors were separated into a small group that met under a tree on the conference grounds. There an American pastor sat with these men talking to them about ministry. That picture was the answer to their prayer. The hope for the church of South Asia was pastors who were equipped for the ministry. That thought, coupled with the challenge given, was the birthplace of what is known today as the Timothy Leadership Institute. (TLI) 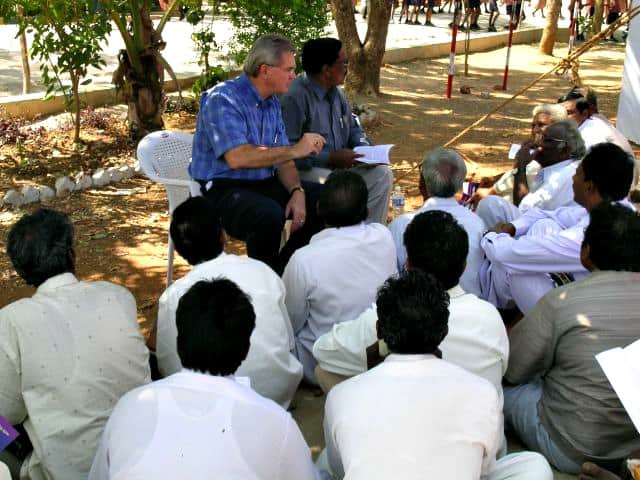 The Timothy Leadership Institute (TLI) is a two week intensive training held annually for three consecutive years. The TLI offers help to the national pastors/leaders by providing Bible knowledge, spiritual growth and practical ministry skills without them having to leave their ministries or families. It also provides an opportunity to meet other pastors from their area for fellowship, prayer, to build and strengthen relationships with and to join in ministry efforts. The cost to sponsor a pastor to attend the TLI is only $250 per year and this provides food, lodging, books & supplies and a small gift to help his family since the pastor is unable to work for the 2 weeks of the institute.

If you are interested in being a part of one of the TLIs, have questions about the TLIs or want to sponsor a pastor, please contact us.